This page, dedicated to the two Japanese Nobel Literature Prize winners, has been created in conjunction with the "Nobel Literature Laureates around the Glove" exhibit currently on display on the 5th floor of Watson Library.

“for his narrative mastery, which with great sensibility expresses the essence of the Japanese mind.” 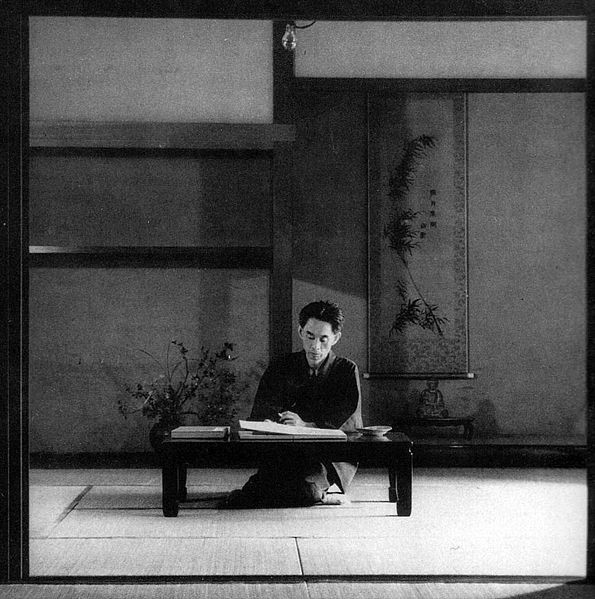 Kawabata Yasunari (1899-1972) is the first Japanese to be awarded the Nobel Prize in Literature. Kawabata made a debut in 1927 with his short story Izu no odoriko (Izu Dancer), which became one of his representative works in his earlier career. With his novel Yukiguni (Snow Country) of 1937, he distinguished himself as one of the representative novelists of the time.

Kawabata lost all of his family members in early childhood. His experiences of loss and orphanhood thus underpinned his writing, but the elegiac tone in his works seems to be linked to the sense of “mono no aware,” Japanese aesthetic ideal which he wanted to pursue in his writings.

On Dec. 12, 1968, Kawabata addressed his Nobel Prize Memorial Lecture in montsuki hakama, the Japanese formal attire. He delivered his lecture, titled “Utsukushii Nihon no watakushi (Japan, the Beautiful and Myself),” in Japanese (simultaneously translated by Edward G. Seidensticker). While referring to Zen philosophy, poems and Heian literature, such as Genji monogatari (The Tale of Genji), which he regarded as “a wide and deep source of nourishment” for Japanese artistic expressions, Kawabata explained the delicate sensitivity of the Japanese, which found ephemeral beauty in the myriad manifestations of nature, such as the snow, moon, the blossoms, the mountains, and the rivers.

Kawabata’s esoteric lecture flows so smoothly like a stream of water---beautiful, yet somewhat vague and unfocused. But in this lecture, in front of the audience in Stockholm, unfamiliar to the Japanese tradition, culture or literature, he showed his mettle to describe the spiritual foundation of the Japanese mind and uniqueness of the Japanese culture as something essentially different from the Western counterparts.

“who with poetic force creates an imagined world, where life and myth condense to form a disconcerting picture of the human predicament today.” 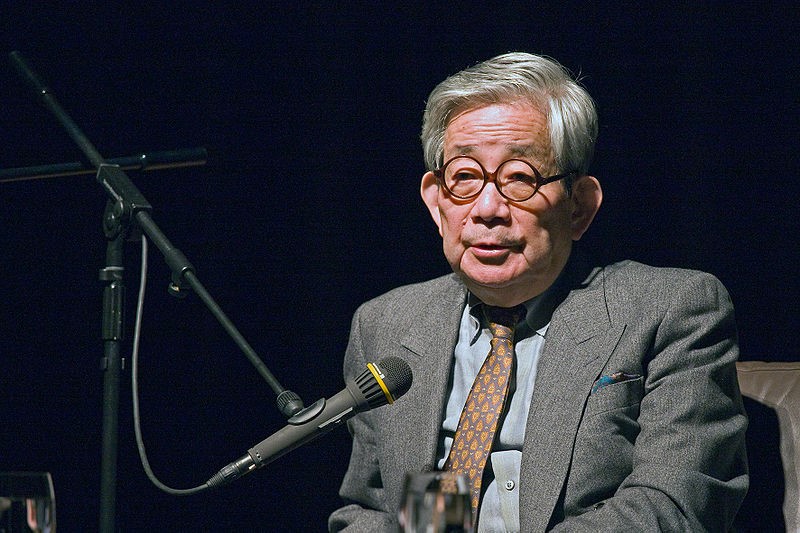 . . . . I wish my task as a novelist [is] to enable both those who express themselves with words and their readers to recover from their own sufferings and the sufferings of their time, and to cure their souls of the wounds. I have said I am split between the opposite poles of ambiguity characteristic of the Japanese. I have been making efforts to be cured of and restored from those pains and wounds by means of literature. . . .

In the Nobel Prize Memorial Lecture, in his speech titled “Aimai na Nihon no watakushi” (Japan, the Ambiguous, and Myself)," while referring to Kawabata Yasunari’s 1968 memorial lecture, Ōe Kenzaburō (1935-) described the tradition of the post-war Japanese writers that they had attempted to “make up for the inhuman atrocities committed by Japanese military forces . . . . Only by doing so did they think they could seek with some humanity reconciliation with the rest of the world.”

Ōe won the Akutagawa Prize in 1958 for his Shiiku (The Catch), a story of friendship between a young boy and a black POW during WWII and its sad end, and established himself in the forefront of the new writers of the day. He is also known for his political involvement, and his strong preoccupation with social and political issues is reflected in his earlier works, though his scathing writings have also caused rifts and violent attacks against him.

In 1963 the birth of his son with serious brain damage led him in a new direction. In 1968, he wrote Kojinteki kenkai (A Personal Matter) which depicted the sufferings of a young and immature father who must confront the birth of his mentally disabled boy. Around this time, Ōe had visited Hiroshima to investigate the aftereffects of the atomic bomb. These tragic personal experiences and historical events have been closely connected and reflected in his works.