Films (after the Conference)

With “GOJIRA 2000 Mireniam (GODZILLA 2000 MILLENNIUM)” released in 1999, the Gojira series, though once concluded in 1995, was revived again. Most of the films in this latest series are narratively independent of each other but are directly connected to the original “GOJIRA” of 1954.

Tomiyama Shōgo, the producer of Gojira series since 1985, has stated that Roland Emmerich’s 1998 version Godzilla made him decide to revive the Gojira series in Japan. To him, the American Godzilla was far different from the Japanese Gojira: the American Godzilla is to be destroyed by humankind while the Japanese Gojira is superior to humankind. Thus, Gojira in the latest series is described as something that humankind must overcome, although the monster will continue to return as yet another menace.

In “GOJIRA MOSURA KINGU GIDORA: DAIKAIJŪ SŌKŌGEKI (GODZILLA, MOTHRA AND KING GHIDORAH: GIANT MONSTERS ALL-OUT ATTACK, a.k.a. GMK)” Gojira is portrayed as the immortal manifestation of the “souls of countless people who fell victim to the Pacific War” and attacks Japan because the Japanese have forgotten the agony and cries of those killed in the conflict. It is interesting to note that in 1954, the monster is the victim of nuclear weaponry and the film is an allegory of the destruction brought by the Pacific War, which was still vivid in the minds of the Japanese people. Yet in 2002, Gojira is interpreted as a “goryō (vengeful spirit),” angered by a contemporary Japan that has apparently forgotten the war and intent on exacting revenge on the nation. But did Japan really forget the Pacific War over the subsequent half-century? On the contrary, for these fifty years, Japanese attitudes toward the Pacific War remained ambivalent and contentious, shifting and swaying among a welter of interpretations: that Japan fought to liberate Asia, that Japan victimized Asia, and that Japan was forced to fight the war, itself a victim of Western imperialism. In any case, Japan has not yet been reconciled with – or forgotten – its past.

Whether the interpretation of Gojira as a “goryō” is successful in terms of the plot of GMK remains doubtful. The pains and agonies Gojira holds due to the war is not expressed in the film. By replacing its expressive eyes with white empty eyes, Gojira in GMK seems to assume the character of a ghost, rejecting the sympathy of viewers and mercilessly killing the three sacred guardian beasts.

Though the highlight of the most recent Gojira movies is the fighting between Gojira and guest monsters as it has been in the past, the series has also focused on those people who encounter Gojira. GMK features a female TV reporter, Yuri Tachibana, and her father Admiral Tachibana, the commander of the anti-Gojira operation. Yuri works for a local cable television company which produces fake documentaries, and she wants to prove herself a professional reporter, to her father above all. Admiral Tachibana, who believes that the Defense Force destroyed the first Gojira in 1954, learns the truth that the Defense Force was utterly useless. Thus, for Yuri, continuing her live broadcast of the fight against Gojira will prove her qualifications as a professional journalist, and for Admiral Tachibana, destroying Gojira by the weapons of the Defense Force will prove the worth of the military. Both find their raison d'être in their relation to Gojira. Against all odds, both challenge Gojira and never retreat from the monster; both pursue their professional goals, strongly asserting, “This is my job.” In the older films, the Japanese were described as powerless sufferers who run away from the monster, and the Self Defense Forces were oftentimes ridiculed for their incapability. The latest series depicts those who confront overwhelming obstacles with strong will and determination. Such a strong message has resonated with the contemporary society of Japan. The collapse of the nation’s once vaunted economic power and the end of the Cold War have made many Japanese lose confidence in and respect for their own society.

In 2004, Toho Studios announced that the Gojira series would end with a blockbuster fiftieth-anniversary film, GODZILLA FINAL WARS. The explanations for Gojira’s demise – the monster’s third over the past half century – are numerous: declining box office receipts, a lack of innovation in the series after five decades, and the limitations of traditional special effects techniques in an age of sophisticated computer-generated animation. Whatever the reason, and whether or not Gojira is killed off in GODZILLA FINAL WARS, the King of Monsters will remain a global pop culture icon and a favorite of fans around the world. Gojira, in the end, is immortal, as a cinematic metaphor, a cultural phenomenon, and a means of understanding modern Japan. 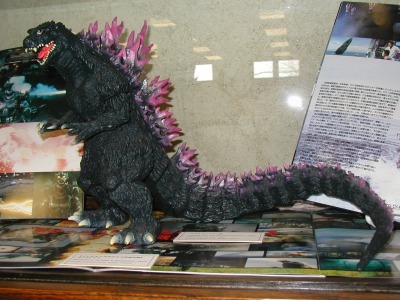 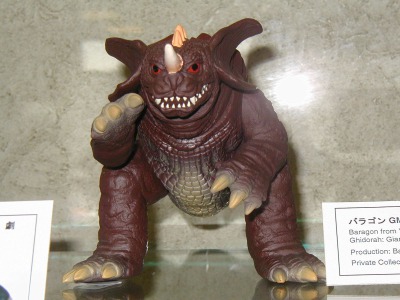 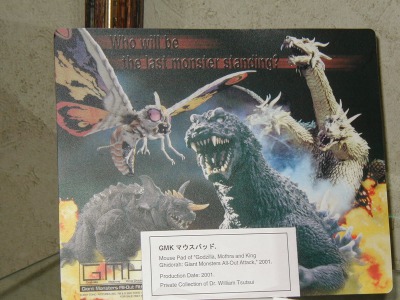 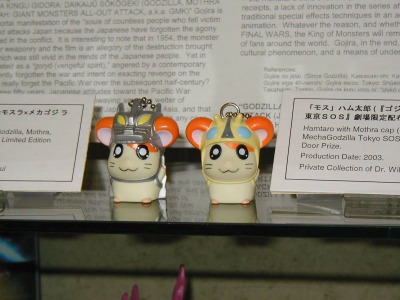 Hamutarō with Mecha Godzilla cap (left) Mothra cap (right). Collectibles distributed at movie theaters. Tottoko Hamutarō was a popular children's animation based on the manga of the same title. The theatrical movie of Hamuraō and Godizlla were jointly screened. 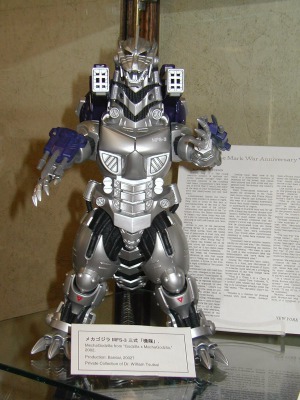 Mecha Godzilla "Kiryū," featured in Godzilla x Mecha Godilla (2002) and Tokyo SOS (2003). Different from the original Mecha Godzilla, which was supposed be created by space alien, this MechaGodzilla in the "Millennium" series was created by the Self Defense Force of Japan. 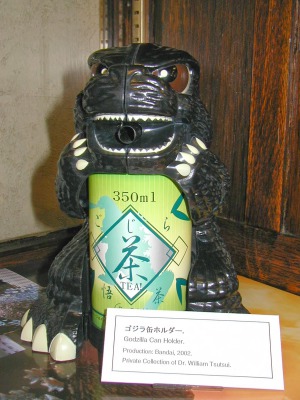