On March 1, 1954, the United States conducted a test explosion of a nuclear warhead on Bikini Atoll in the South Pacific. A cloud of radioactive ash caused by the blast engulfed a Japanese fishing boat, Daigo Fukuryū-maru (Lucky Dragon No. 5), 85 miles away from the test area. The tuna later unloaded from the ship were contaminated with radiation, and radioactive rain fell over Japan. The "Lucky Dragon Incident” terrified the Japanese people with the vision of nuclear holocaust, a horror which they had faced only a decade before at Hiroshima and Nagasaki.

Inspired by this “Lucky Dragon Incident” and two American special effects films, “KING KONG” (1933) and “THE BEAST FROM 20,000 FATHOMS” (1953), GOJIRA waded ashore in Japan on November 3, 1954, reducing Tokyo to rubble with its gigantic feet and radioactive fire. To Japanese audiences at the time, the existence of Gojira was real to the extent that it embodied the fear of nuclear annihilation during the Cold War era as well as the nightmarish memories of the Pacific War. Gojira, however, had an ambiguous character: it was a fearful assailant which brought back the horrors of war and a massive force which destroyed the order of society, and yet at the same time it was itself a victim of nuclear radiation.

At the end of the movie, Gojira is dissolved into seawater by the Oxygen Destroyer, a powerful new ”weapon of mass destruction” invented by the scientific genius, Dr. Serizawa. Dr. Serizawa, who fears the misuse of his creation, ends up sharing his fate with Gojira, thereby keeping the secret of Oxygen Destroyer from falling into the wrong hands. The film concludes with Dr. Yamane’s famous anti-nuclear message, “I don’t think that Gojira was the last one. If we continue H-bomb experiments, the same kind of Gojira will appear again somewhere in the world.”

Certainly, the Gojira which melted into the dark ocean in 1954 was not the last one. Gojira’s unexpectedly long history in show biz had just begun. Backed by successful box office returns (with 9,610,000 tickets sold), the second Gojira film quickly appeared on the silver screen the following year. Furthermore, in 1956, the original “GOJIRA” made its worldwide debut, though it was heavily re-edited and its name was changed to “GODZILLA, KING OF THE MONSTERS.” Professional wrestling was an extremely popular form of entertainment in postwar Japan, so the Gojira movies produced after 1955 generally featured two (or more) giant monsters wrestling. In 1962, a dream match between Gojira and King Kong, the giant ape from Hollywood, came true.

Photos of the Exhibition 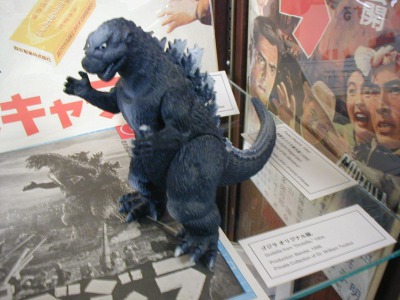 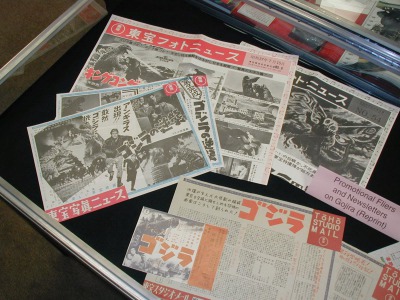 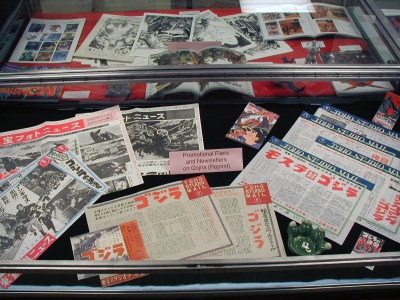 Reproductions of flyers and newsletters, originally issued by Toho.