Kuzushiji is Japanese cursive script. Many of pre-modern documents are, whether they were handwritten or print, written in kuzushiji. It is extremely important to get familiar with kuzushiji in order to read pre-modern Japanese texts. Understanding  変体仮名 (hentaigana), the variant (and obsolute) form of modern hiragana, is another essential skill to read pre-modern Japanese texts. Hiragana is one of the components of Japanese phonetic lettering system, and with a few exceptions, each sound in the Japanese language is represented by one hiragana character. However, until the Japanese script reform of 1900, each syllable had been written using a variety of hiragana, originated in manʼyōgana, an ancient writing system that employs Chinese kanji characters to represent Japanese language. The variant form is now called 変体仮名( hentaigana).

This sample image below shows the current hiragana あ and two different hentaigana in cursive form and its original kanji character (阿 and 安). 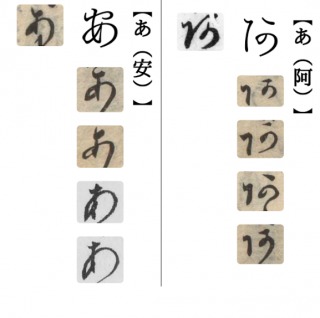 The image is taken from KuLA, an app for reading kuzushiji.

This box lists useful websites and apps to study kuzushiji. Unless noted, the texts are in Japanese.

This app is to help the users study kuzushiji by showing the image of kana and kanji, taken from pre-modern publications. The uer can send questions to other users.

This app can help you to recognize which kanji each kana is based on, and how that kanji is read.