History: Origin, 24-nengumi and Beyond

Magazines for children in prewar Japan mainly focused on publishing novels about adventures and historical heroes. Post-war Japan saw the introduction of story manga by Tezuka Osamu, which quickly gained popularity. Subsequently, the contents of children’s magazines shifted from novels to story manga. Inspired by Tezuka, younger artists such as Ishimori Shōtarō and Akatsuka Fujio began to publish their works in manga magazines. Such a content shift can also be found in girls’ magazines. However, as noted in case 5, the style of beautiful illustrations---popular content for girls’ magazines--- strongly effected the visual presentation of shōjo manga.

In its earlier stage, shōjo manga was generally created by male artists, but with the rise of its popularity in the 1960s, publishers actively recruited teenage girls, who grew up reading manga, to be professional manga artists. Some of those female artists born around Shōwa 24 (1949), known as “24-nengumi (Year 24 Group),” are credited with innovating the manga genre, both in terms of its content and visual expression. 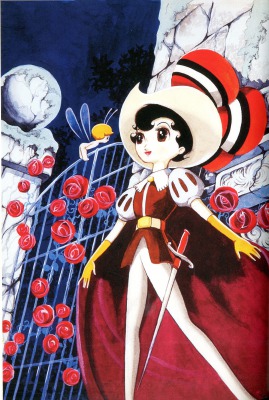 This is a representative work for Tezuka Osamu from his early career, and is probably the first story manga created for girls. This fantasy story is about the adventure of a girl named Sapphire, who must hide her true identity and pretend to be a male prince to protect the right of succession from the vicious Duke Duralumin. In this story, God gives every soon to be born baby a heart; the one who received a man’s heart would grow to be indomitable and courageous, and the one who received a woman’s heart would grow to be kind and gentle. Sapphire received both a man’s and woman’s heart, so she can surpass her gender boundary. While she wears a mask and fights against evil as an unidentified knight, she also disguises herself as “a maiden with flaxen hair” and falls in love with Prince Charming. Sapphire’s adventure fascinated girls, who were expected to become a kind and gentle wife and mother when they grow up. The ideal gender role is clearly presented, but many dansō no reijin characters would follow this work and shake traditional gender roles.

(Image taken from the exhibition catalog below, page 18.)

A young boy Ken’ichi visits a small village to observe the summer festival. He meets a beautiful girl in a white kimono, but no one in the village knows about her. . . The author Ishinomori Shōtarō is one of the major influencers of post-war Japanese manga. He was very active in producing shōjo manga earlier in his career, and he was eager to experiment; adopting techniques produced by different mediums, such as film. He published a comic-drawing manual for up-and-coming comic artists that used this story to explain his techniques. This page, the beginning of this story, portrays his film-like approach; where the back of the protagonist appears in the second koma, then the camera zooms out to show he is going into the forest alone.

(Illustration above is from Ishinomori's official site.)

The whole story is included in Shōnen no tame no mangaka nyūmon, in which he discusses how to draw manga.

The author Akatsuka Fujio is known as a pioneer of the comical/gag genre and is referred to as “The Gag Manga King.” This comical work features a young girl Akko-chan, who can transform into anything she wishes by using a magical compact mirror. This work was animated in 1969. Alongside Mahō-tsukai Sarī (Sally the Witch) (1966-1967) by Yokoyama Mitsuteru (1934-2004), this work helped establish the now-popular “mahō shōjo (magical girls)” genre in anime. This genre features girls with magical powers (in some case, given by mysterious beings) experiencing extraordinary events.

Selected stories of Himitsu no Akko-chan are included in the second series of Gendai manga. See below.

This work is a romantic and tragic love story between a human and a valkrie, created by one of the earliest post-war female story manga tellers Mizuno Hideko. Although a romantic story is now mainstream for shōjo manga, in those days, the standard plot of shōjo manga avoided romance. Reflecting the contemporary post-war society, the main theme of shōjo manga was to depict the life of a young elementary aged girl, similar to the target reader, as she admirably tried to overcome misfortune. This work, therefore, is credited as the first shōjo manga to express romantic relations between a man and a woman. Mizuno’s spectacular story and elegant drawings took young female readers to the unknown world of romance and fantasy, inspiring the next generation of manga artists.

This series follows Edger, a being who was forced to become a vampire called “The Clan of Poe,” and to live eternally in the form of a 14 year old boy. This fantasy manga depicts Edgar, who lost his beloved and carries hollowness in his heart, as well as humans who encounter the mysterious boy. This lyrical fantasy manga set the image of vampires in Japanese popular culture, which is completely different from the scary and horrifying image of a vampire often presented in Western horror films. The author Hagio Moto is a core member of the 24-nengumi,  and she is still one of the most representative female manga artists in Japan. After a 40 year hiatus, she started a new series in 2016 under the same title.

Consisting of short stories, this series narrates the story of four boys aged 5 to 7 who left their parents and wandered off together. Each of the boys received psychological and/or physical abuse from his parent(s) and carries unhealed wounds in his heart. While being strongly united and co-dependent, the boys try to find a place to belong amongst those who truly love and understand them. Each boy sees adults and society with critical, cynical, or innocent eyes, and their monologues and dialogues---sharp but witty---reveal the cruelty of society and deception of adults. Such words as “domestic violence” or “dysfunctional families” were not popular when this work was created, but their psychological suffering, uneasiness, and loneliness provoked strong sympathy among impressionable juvenile readers. A quarter century has passed since the untimely death of the author Mihara Jun, yet this impactful and thought-provoking work maintains a cult following.

Though originally created for juvenile female readers, this work is full of action, violence, rapes, and bloodshed fighting. As the genre of shōjo manga has evolved in terms of its story-making and visual presentation, different ranges of groups---from young adult boys to social/cultural critics---have become shōjo manga readers, and this is a particularly widely-accepted work. Set in New York City in 1985, this hard boiled suspense story starts with a strange series of suicides and the word, “banana fish,” left by one of them. Ash Lynks is a teenage street punk in a slum in New York and gets involved with this mystery, and he eventually finds a government-level conspiracy concerning “banana fish.” While this complicated story presents violent killings by street gangs and the mafia, it sensitively describes Ash’s tragic upbringing and his friendship with a Japanese boy named Eiji. While running this series, the author Yoshida Akimi drastically changed her artistic style to be cleaner and more sophisticated. However, it is interesting that the artistic style at the beginning of this series shows a strong resemblance, and possible influence, from the works of Ōtomo Katsuhiro, the author of Akira, who pursued realism in visual presentation.