Brian, Denis. The Curies: A Biography of the Most Controversial Family in Science. Hoboken, N. J.: Wiley, 2005.

Curie, Marie. Radioactive Substances. A translation from the French of the classical thesis presented to the faculty of Sciences in Paris. New York: Philosophical Library, 1961.

Ferris, Helen Josephine. When I Was a Girl: The Stories of Five Famous Women as Told by Themselves. New York: Junior Literary Guild, 1930. 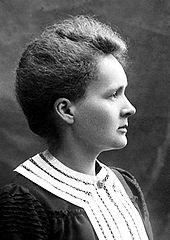 Marie Curie’s complicated life and character became an inspiration for many authors and artists all over the word. From visual arts, film, literature, to drama and poetry, her character was not only portrayed, but also examined and evaluated in order to understand and give justice to this extraordinary and yet so human person.

Marie Curie’s scientific work was intricately connected and interwoven with her emotional life. She was the wife of her research partner, Pierre Curie and the  mother of two girls. Her daughter, Irene, later became her research partner and a great scientist herself, winning the Nobel Prize as well. The other daughter Eve, became an author and an artist. Marie Curie was also a member of a tightly knit Polish family separated by distance and culture.  During the WWI she was a nurse-radiologist working to improve the health of wounded soldiers. She was also an activist seeing her discoveries as a service to humankind. Her ability to perform these and other roles was not without a price but she persevered and excelled in all of them.

In 1921, during Marie Curie took a very successful fundraising trip to the United States. The trip was arranged with great effort and care by Marie Mattingly Meloney (Missy). Funds were collected by many American organizations for radium needed at Curie’s laboratory in France. The raised amount exceeded one hundred thousand dollars and on May 20th President Warren Harding presented Marie Curie with a symbolic gram of radium.

“My reasons for undertaking a biography of Marie Curie were as much of our time as Eve Curie’s were of hers. I wanted to peel back the layers of myth and idealization which had grown up around Marie Curie’s story ever since her daughter told it over fifty years ago. I have looked for evidence that Marie Curie was not just a singular, exceptional woman (though she was indeed that) but also a woman who experienced the same difficulties as other women with strong opinions and ambitions. That meant exploring more carefully the barriers to women which surrounded her in Poland and in France.”

In the conclusion Ogilvie writes: “It is important to realize that her scientific creativity occurred in spite of all the obstacles that she encountered, including prejudice because she was a woman, ill health for most of her life, loss of loved ones, and attacks on her personal life. Overcoming these barriers, she became not only the first woman to win a Nobel Prize, but the first person to win two Nobel Prizes. Add to that, the fact that her daughter also won a Nobel Prize. She was tenacious when she had a goal, and her life and work demonstrate that she is deserving of all of the accolades that she has received.”

“Maria Curie Sklodowska was always very proud of her Polish birth. Her life and times reflected often her native origins and she was always recalling her 24 years in Poland even though she spent her entire adult life in France. To understand this great woman, a person must know some of the history of Poland and its culture.”

Brian, Denis. The Curies: a biography of the most controversial family in science. Hoboken, NJ: Wiley, 2005.

“Marie agreed with Pierre that their lives had been spoiled by honors and fame. And both yearned to return to their old life, especially in the spring, when Marie, now thirty-six, was pregnant. As Pierre told his friend Georges Gouy, ‘Never have we been less at peace. There are days when we hardly have time to breathe. And to think that we dreamed of living like wild people far from other human beings!’”

In 1903 Marie Curie earned her doctorate in sciences. She presented her thesis titled: “Researches on Radioactive substances” to the Faculty of Science in Paris. This work now belongs to classics of science. It started a new field of inquiry that eventually led to nuclear physics.

In her book “Pierre Curie” Marie writes about her admiration for her late husband:

“In our life together it was given to me to know him as he had hoped I might, and to penetrate each day further into his thought. He was as much and much more than all I had dreamed at the time of our union. My admiration of his unusual qualities grew continually; he lived on a plane so rare and so elevated that he sometimes seemed to me a being unique in his freedom from all vanity and from the littleness that one discovers in oneself and in others, and which one judges with indulgence although aspiring to a more perfect ideal. In this lay, without doubt, the secret of that infinite charm of his to which one could not long rest insensible. His thoughtful expression and the directness of his look were strongly attractive and this attraction was increased by his kindliness and gentleness of character.”

Marie Curie writes about the last two days of Pierre in Curie’s life:

“In 1906, quite ill and tired, he went with me and the children to spend Easter in the Chevreuse Valley. Those were two sweet days under a mild sun, and Pierre Curie felt the weight of weariness lighten in a healing repose hear to those who were dear to him. He amused himself in the meadows with his little girls, and talked with me of their present and their future. He returned to Paris for a reunion and dinner of the Physics Society. There he sat beside Henri Poincare and had a long conversation with him on methods of teaching. As we were returning on foot to our house, he continued to develop his ideas on the culture that he dreamed of, happy in the consciousness that I shared his views.

The following day, the 19th of April, 1906, he attended a reunion of the Association of Professors of the Faculties of the Sciences, where he talked with them very cordially about the aims which the association might adopt. As he went out from this reunion and was crossing the rue Dauphine, he was struck by a truck coming from the Pont Neuf, and fell under its wheels. A concussion of the brain brought instantaneous death.

So perished the hope founded on the wonderful being who thus ceased to be. In the study room to which he was never to return, the water buttercups he had brought from the country were still fresh.”

Curie, Marie. Radioactive substances; a translation from the French of the classical thesis presented to the Faculty of Sciences in Paris. New York: Philosophical Library, 1961.

“Marie Sklodowska was born in Warsaw, Poland in 1867. In 1891, when the University of Warsaw refused admissions to Marie because she was a woman, she entered the Sorbonne where she earned her master’s and doctor’s degrees in Physics. It was there that the eminent physicist Becquerel first introduced her to the phosphorescence of Uranium which was to lead her to the discovery of Radium thirteen years later.

In 1895 she married her teacher Pierre Curie with whom she discovered and did much to elucidate the properties of Radium and its transformation products. When Pierre met with a fatal accident Mme Curie succeeded her husband as professor of physics at the Sorbonne, becoming the first woman faculty member in the 650 years of the school’s existence. She continued in her research and in 1911 received the Nobel prize in chemistry for isolating Radium.

Mme Curie passed away in 1934 a victim of exposure to the deadly rays from the element she and her husband discovered.”

Ferris, Helen. When I was a girl: the stories of five famous women as told by themselves. New York: Junior Literary Guild, 1930.

Here is what Marie Curie writes about her own childhood:

“We all started out studies very young. I was only six years old, and because I was the youngest and smallest in the class, was frequently brought forward to recite when there were visitors. This was a great trial to me, because of my timidity; I wanted always to run away and hide. My father, an excellent educator, was interested in our work and knew how to direct it, but the conditions of our education were difficult. We began our studies in private schools and finished them in those of the government.”

As Burton Feldman says in the preface to his book, The Nobel Prize: A history of genius, controversy and prestige:

“But the Nobel Prize is more than the sum of its six separate fields: it is a mysterious incarnation of power and authority, an anointed ritual whose claims are accepted as part of the order of things. The Nobel Prize is at once a relic of the past (evidenced by the Swedish king who bestows the awards) and a self-admiring mirror of our democratized, scientized, secularized modern culture.”

“The Curie’s marriage brought together two extremely talented scientists with complementary minds, personalities, and scientific styles. Whereas Pierre was a slow thinker who framed scientific conclusions soberly and cared little for priority and fame, Marie moved quickly from experiments to bold, published hypotheses."

“An intensely private woman, she hid deep emotions behind a composed façade. Longing for a simple family life and freedom to work in her laboratory, she disliked distractions and disturbances. When fame and feelings intruded, the threatened the settled pattern of her existence. Only later did she learn to contain the passions that had almost destroyed her and to use her unsought celebrity to serve science.”

“Curie, whose name is as indissolubly linked with radioactivity as are those of Ampere, Volta, and Ohm with electricity, is probably still the most famous and most written- about woman scientist of all time…Curie’s icon status as a premier example of a woman scientist is worldwide. Articles attempting to provide insight into her life and work from particular perspectives continue to appear and recent analyses of her contributions to the development of science are also available.”